How to Create Akka.NET Actors with Durable State

One of the most frequently asked questions I get is about how to create stateful actors that are also durable by default, meaning that the actor can recover its state from some sort of storage engine in the event that the entire Akka.NET process needs to be restarted.

Enter Akka.Persistence - an entire framework built into Akka.NET that’s designed to allow you to create actors with durable state that can be persisted on any database or storage system you want.

In this post we’re going to explore the concepts behind Akka.Persistence, how it works, and what some of the available storage options are.

NOTE: Akka.Persistence is still in beta at the time of publishing this post, so your mileage may vary.

Akka.Persistence is designed to deal with the following concerns Akka and Akka.NET users have had over the years:

A restart of a process can be as simple as shutting down or restarting a console app, ASP.NET process, or a Windows Service - it can also include redeploying a new version of an app in the event of a planned upgrade or an unplanned hardware failure. Ensuring that your actor’s data and any critical messages is persisted and recovered between those events is paramount to building a reliable system. This is where Akka.Persistence comes in.

In a normal Akka.NET actor, all of an actor’s state exists as internal fields within an actor class declaration.

In a persistent Akka.NET actor, we still have our application state in-memory - but our actors recover it on restart from a durable store by replaying messages and aggregates of messages from our persistent store.

The first thing you may notice about the persistent implementation of this actor is that there’s no actual persistence code anywhere. No IRepository or DbConnection. Just a call to the Persist method inherited from the ReceivePersistentActor base class.

That’s no accident - Akka.Persistence is driven heavily by configuration (more on that in a moment) and abstracts away the details of which database it’s storing messages to and how those messages are represented in the store.

The Persist method call is what causes the persistent actor to journal each new string message into the configured store. However, the ReceivePersistentActor also happens to differ from a typical ReceiveActor in that we don’t declare any Receie<T> handlers in our constructor. Instead we have two different types of handlers:

In Akka.Persistence there are two different ways we can store events and actor state:

Both of these concepts are part of a design pattern called Event Sourcing, which Akka.Persistence uses to recover and persist internal state from a durable store. Event sourcing is ideal for message-oriented systems like Akka.NET actors for a variety of reasons, not the least of which is that it plays nicely with other core Akka.NET concepts such as immutability and reactive messaging.

Working with the Journal

Here’s an example of a persistent actor from Petabridge’s Akka.NET Design Patterns training - a chat room actor responsible for persisting the state of a chat room to disk, much like the Akka.NET Gitter chat:

Each time a user sends a message to the chat room, a ChatMessage object is produced that contains the following data:

In order for our chat room to be able to provide users with a history of messages that were written while they were away, we need to have a persistent record of the messages written into the chatroom over time. Using the Journaling capability of the Akka.Persistence library is a perfect fit for this - it allows us to build a history of the chatroom based on the time each message was sent.

The Akka.Persistence journal is the append-only log that constitutes the “single source of truth” for what actually happened in this chatroom, and after three messages are written to the chatroom the journal will look like this: 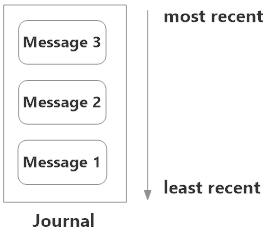 Each of these messages will be replayed and added to our actor’s in-memory event store, which is what the actor still uses when interacting with other actors inside your ActorSystem.

Snapshots are typically worked with in combination with the journal - you want to prevent the journal from growing excessively large, otherwise your actors start to take forever to recover. Therefore it’s a best practice to “compress” the state of your actor into periodic snapshots and delete the journal.

There’s more going in inside this actor, but it’s not fundamentally much more code than what we had when we were relying solely on the Akka.Persistence journal. The snapshots in this actor will help us drastically speed up recovery time - specifically it’s the combiation of these two methods that ensure that:

The Command<string> will persist the message to the journal, but for every 100 messages we’ve journaled we’ll compress the entire state of the actor into a single snapshot via the SaveSnapshot method. That snapshot will be loaded in a single read from the snapshot store using the Recover<SnapshotOffer> recover method the next time a persistent actor with this PeristenceId recovers.

By default, persistent actors will only recover their most recent snapshot - but there are methods available for being able to fetch previous snapshot versions.

Now that we’ve covered a little bit about how the persistence mechanisms work, let’s talk about how Akka.Persistence actually works with a physical database store like SQL Server.

How Akka.Persistence Works with Databases

For this section, I’ll use the Akka.Persistence.SqlServer implementation as an example.

One of the key traits of all persistent actors that we have not covered is this abstract field that you have to fill in on every ReceivePersistentActor implementation:

The PersistenceId field is important - it uniquely identifies an entity that is persisting its state using Akka.Persistence, and there should be exactly one persistent actor at any given time for a single PersistenceId.

Think of it this way - imagine you’re using the Child-per-Entity Pattern and have lots of different stateful entities that all need to persist their state to a durable store. The PersistenceId is what allows Akka.Persistence to distinguish which saved events belong to which entity.

In the layout of the SQL Server tables used by Akka.Persistence, here’s what the journal looks like: 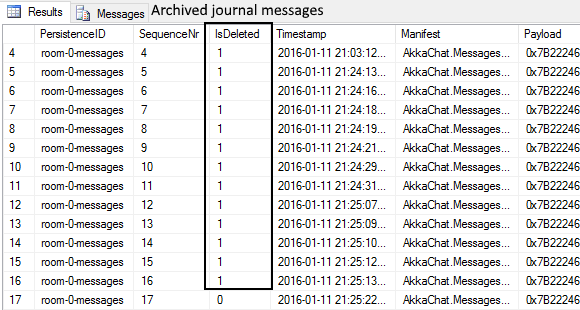 You might also notice that the Payload field consists of bytes and the PayloadType includes the .NET fully-qualified name of the type of message - that’s how Akka.Persistence is able to be so transparent: it serializes messages and writes the binary output into the store.

The SnapshotStore schema in SQL Server is virtually identical:

There are lots of Akka.Persistence options already available for you to use as of writing this.

The default, built-in providers are the InMemoryJournal, which journals events in-memory, and the LocalSnapshotStore, which saves snapshots to local disk.

However, we have lots of implementations available from the Akka.NET project itself as well as members of the community:

I’ve even seen MySQL and RavenDB implementations running around in the wild, but I don’t know if that code is published.

Within Akka.Persistence, you can configure your snapshot store and your journal independently from each other - you could journal messages to MongoDb and save snapshots to Azure Blob Storage if you wanted to. Akka.Persistence will allow that - all you have to do is specify the providers you want inside the akka.persistence HOCON section and provide the plugin-specific settings required for each plugin.

And that’s it - see each individual plugin for reference on what the required settings are.

If you’re interested in learning more about Akka.Persistence, consider signing up for our Akka.NET Design Patterns Virtual Training. We cover it in more depth there.

Otherwise, ask any questions you might have in the comments!

UPDATE: If you’re curious to learn more about Akka.Persistence, check out our post on “Guaranteeing Delivery of Messages with Akka.Persistence.AtLeastOnceDeliveryActor.”