Technical Overview of Akka.Cluster.Sharding in Akka.NET

In our previous post about using Akka.Cluster.Sharding we looked at the module from an end-user’s perspective. Today we’ll provide a little more insights into how this plugin works internally.

All of them can be visualized using diagram below: 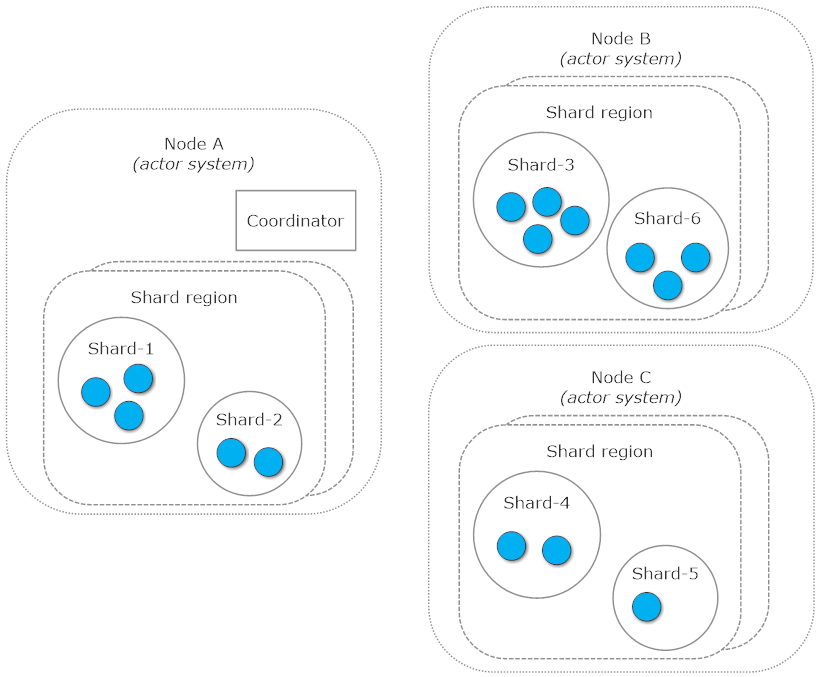 If you look at actor paths of the entities you’ve created you’ll see that they reflect the structure of that hierarchy. They follow the pattern /user/sharding/<typeName>/<shardId>/<entityId>. Given that, it’s easy to infer that /user/sharding/<typeName> is path to a shard region while subsequent path segments are responsible for shard actor and entity actor.

When a shard region is used to send a message to an entity inside a shard living on a different node for a first time, it must resolve location of that shard first. A cluster-global register of every shard is tracked by the coordinator actor. Coordinators are singletons, which means, that there will never be more than one instance of it living inside the same cluster and it is usually placed on the oldest/seed node. It’s a heuristic driven choice as oldest nodes usually have tendency to be a long-living ones in situations when we add or remove additional machines to scale cluster capacity to match incoming traffic.

Once a shard region receives an address location of the shard it will cache it (until a shard has to rebalance to another node.) All subsequent messages send to that shard will happen without need of calling coordinator anymore, which avoids turning the coordinator into a bottleneck.

Rebalancing is a process in which entities migrate from one node to another in order to more evenly distribute entities across the cluster. However migration process is expensive and making it one by one for every affected entity is expensive. For this reason, entities always live in shards and when we migrate them we always migrate the whole shard.

Shards also provide “islands” of locality that can be used to optimize message communication and reduce network usage.

Rebalancing can occur when node agreed to exchange shards with each other and one node is much more heavily loaded with shards than another. It can be triggered within a given time interval (which can be set using akka.cluster.sharding.rebalance-interval), but most often you’ll see it happen once a new node joins the cluster. 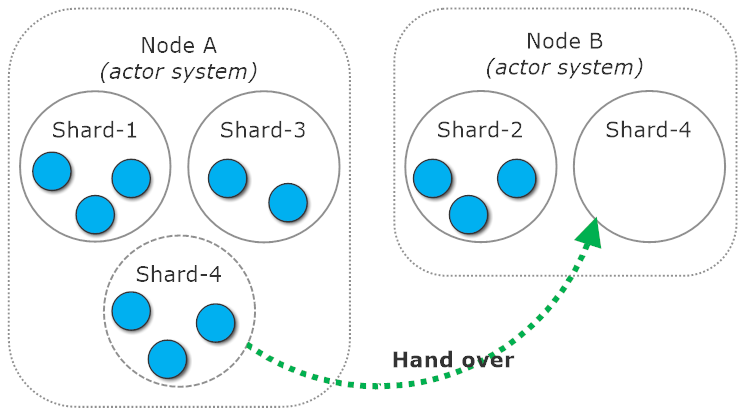 Once shards are rebalanced or restarted on new node they won’t resurrect their entities to match the state from before handing shard over between nodes. An entity will have to be addressed via message in order to be started again. This may sometimes go in conflict with our application logic i.e. when entity has scheduled itself a message and it’s expecting to receive it a next minute or two. Fortunately, this behavior can be changed by setting the akka.cluster.sharding.remember-entities flag on.

At this point you might ask: what happens to all messages sent to a shard’s entities during hand over? Answer is simple: they are buffered until shard migration finishes. Once that happens all buffered messages are redirected to new shard location, causing entities to be resurrected if necessary. This protects us from accidentally loosing messages, increasing reliability of our system.

NOTE: keep in mind that in Akka.NET by default all messages are kept in memory. This also means that in case of unexpected machine crashes all unhandled messages will be lost. It’s a conscious decision - we deliberately trade off reliability for high performance. If this is not the case for you, consider using durable queue or log (like RabbitMQ or Kafka) in front of your actor system or make your actors’ states persistent by using an Akka.Persistence module or your own hand-rolled repository.

Shard allocation and rebalance is conducted by the logic defined inside components inheriting from IShardAllocationStrategy interface. By default a LeastShardAllocationStrategy will be used; it simply allocates new shards on the least populated nodes in terms the number of shards, not the number of entities living on them and rebalances them there if a specified difference between the most and least populated nodes has been exceed. You can configure that threshold by using akka.cluster.sharding.least-shard-allocation-strategy.rebalance-threshold setting. You can also specify your own strategy when starting a new shard region on the node.

When a rebalancing is going to occur a shard will send a hand off message to all of it’s entities. By default this message will be a PoisonPill causing them all to stop immediately but you can replace it with a custom one in case if you need to perform some preparations before migrating.

How to determine correct size of a shard?

There is no easy answer here. While having a large number of shards with a small number of entities are less expensive to migrate, the overall memory footprint and costs of keeping their location up to date on each node increases along with the number of shards. With bigger shards this overhead is smaller, but cost of rebalancing is higher.

Ultimately,shard size should fit the type of allocation strategy used - because it affects how often rebalancing will occur. But with defaults, shard migration is usually pretty rare situation, therefore prefer to grow in size of each shard instead of increasing the number of shards.

A lot of people have a one common problem when it comes to combining Akka.Cluster.Sharding with Lighthouse on default settings. We’ll propose a solution, but first let us understand the nature of a problem.

Do you remember how we were talking about role of shard coordinator? As we said, coordinators by default will try to be established on the oldest nodes. What does that have to do with Lighthouse? Lighthouse is basically a stub of an Akka.NET ActorSystem with cluster capabilities. Since it’s used as a seed, it also means that Lighthouse nodes are usually considered the oldest ones. However they have no idea on how to deal with sharding protocol. Therefore, once cluster sharding nodes try to access a coordinator they’ll start to look for it on the Lighthouse nodes where it cannot be found.

So how can we stop cluster sharding from trying to communicate with invalid nodes? Akka.NET allows us to build heterogeneous clusters. By using cluster roles, we can group individual nodes by their responsibilities. Akka.Cluster.Sharding module can also make use of them. By specifying akka.cluster.sharding.role we can limit a number of nodes, on which cluster sharding is expected to operate. By excluding lighthouse nodes from that role, we explicitly say cluster sharding to stop looking for coordinator there.

There are situations in which you may want to use automatic message routing provided by cluster shards from nodes where shards themselves are not going to be hosted. This is still possible by using shard region proxies:

Since proxies are not responsible for creating entities things like actor Props or allocation strategy are not needed here. However, you still need to provide message extractor as this component is responsible for message routing to correct destination.

While cluster sharding deals with a lot of actor management concerns for you, it’s not a complete black box. Shards and regions provide a variety of messages that can be used to query for their current state and retrieve all necessary metadata. Let’s quickly enumerate some of them.

Query message, that can be send to a particular shards:

All of those can be used to explore current structure and localization of shards and entities, making it easier for you to monitor and navigate through them.