Lesson 1 - Working with Akka.NET and Akka.Cluster

Welcome to the first stage of “End to End Akka.NET Distributed Programming!”

In this first lesson, we’re going to learn how to connect multiple Akka.NET ActorSystems together using Akka.Remote and Akka.Cluster to form cooperative, elastic, highly scalable applications.

Akka.CQRS is a reference architecture for Akka.NET, intended to illustrate the following Akka.NET techniques and principles:

Throughout this course, we will gradually implement all of these tools alongside Docker and Kubernetes.

The write-side of the CQRS operation, the Trading Services, are primarily interested in the placement and matching of new trade orders for buying and selling of specific stocks.

The Trading Services are driven primarily through the use of three actor types:

The domain design is relatively simple otherwise and we’d encourage you to look at the code directly for more details about how it all works.

The read-side of the cluster, the Pricing Services consume the Match events for specific ticker symbols produced by the OrderBookActors inside the Trading Services by receiving the events when they’re published via DistributedPubSub.

The MatchAggregator actors hosted inside Akka.Cluster.Sharding on the Pricing Services nodes are the ones who actually consume Match events and aggregate the Match.SettlementPrice and Match.Quantity to produce an estimated, weighted moving average of both volume and price.

We won’t be using the Pricing Services until lesson 4, when we begin to work with Akka.Cluster.Tools and Akka.Cluster.Sharding.

To start this lesson, we need to checkout to the start branch in our git repository:

At the moment, we have two services that are designed to work together:

However, these services have no way of communicating - this is what we intend to fix through the use of Akka.Remote and Akka.Cluster.

When most developers start learning Akka.NET they start with actors that communicate solely through in-memory message passing. The asynchronous, fire-and-forget messaging syntax we all learned over and over again in Akka.NET Bootcamp:

After installing the Akka.Remote NuGet package into your Akka.NET application, your ActorSystem can begin receiving inbound TCP connections from other ActorSystems running Akka.Remote using the following HOCON:

This will create an inbound listening address that looks like the following:

In Akka.Remote we’re able to use network transports, typically TCP sockets, to allow multiple ActorSystems to communicate with each other over the network. If you had a top-level actor running with the name “foo” inside your “MySystem” ActorSystem, another Akka.NET actor running in a different process could send it a message with the following ActorSelection:

The “hi” message will be serialized into a byte array, transmitted over TCP, received by our local TCP endpoint, deserialized back into its string representation, and then successfully delivered to our /user/foo actor as though it were a local message.

What’s really powerful though is what would happen if we were to reply back to the actor who sent us the “hi” message:

When we reply back to the Sender of the “hi” message, we’re actually replying back to a RemoteActorRef - a special actor reference that points back to an actor that is running in a different ActorSystem than the one our current actor is running inside of! This is where the real power of Akka.Remote comes into play: RemoteActorRefs are location transparent - we don’t even need to know that we’re talking to an actor on the other side of the network when we send it a message because remote message passing and local message passing don’t require any code changes on the part of the Akka.NET developer. 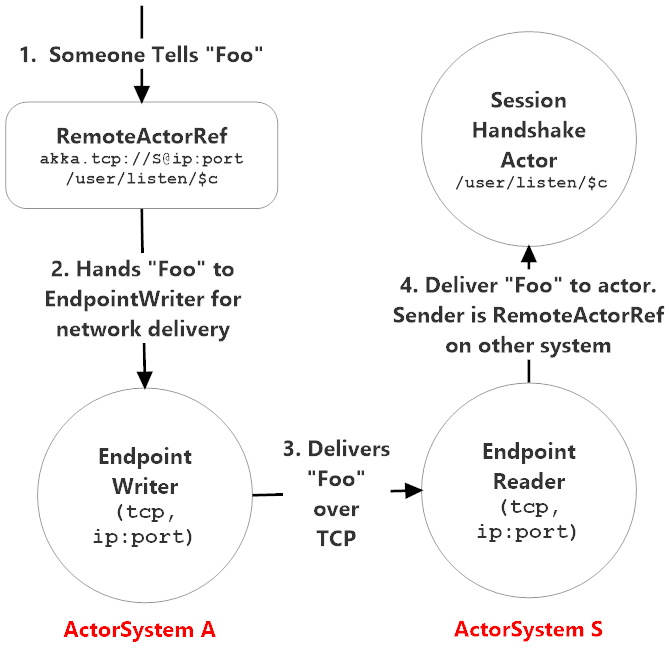 That all is this works, mostly transparently, makes it extremely easy for Akka.NET developers to build networked systems without large amounts of plumbing.

But how can we ensure that those networks are built with a tendency towards high availability and fault tolerance? We do that through the adoption of Akka.Cluster: another Akka.NET component that uses Akka.Remote under to construct resilient, scalable networks of Akka.NET processes.

A cluster represents a fault-tolerant, elastic, decentralized peer-to-peer network of Akka.NET applications with no single point of failure or bottleneck. The Akka.Cluster gives us the ability to create these types of applications.

Akka.Cluster depends on Akka.Remote, but has a similarly simple configuration for most use cases:

The way Akka.Cluster works is thus: at startup each node will attempt to connect to the ActorSystems running at the addresses specified inside the akka.cluster.seed-nodes collection.

Once a node is able to successfully join at least one of the seed nodes, it’ll be introduced to the other nodes in the cluster. Eventually, every node will have a connection to every other node in the cluster, like so: 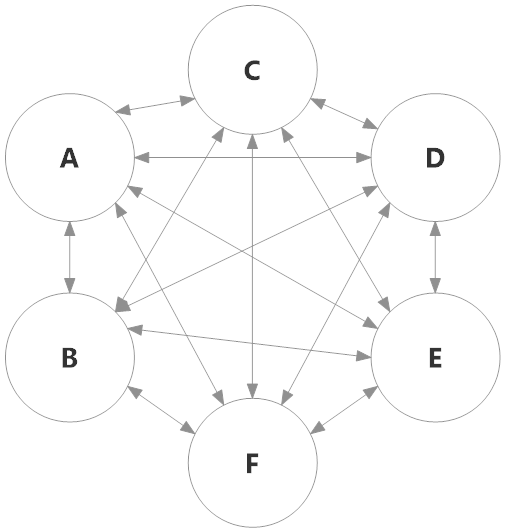 Every node has a connection to every other node - this allows for easy communication between nodes, rapid failure detection, and quick propagation of changes in the cluster’s topology, such as when a node joins or leaves the cluster.

What makes Akka.NET clusters particularly useful, however, is the fact that we can describe what capabilities are of each node in the cluster through the “roles” declaration inside the akka.cluster HOCON:

Roles are used to help distinguish different Akka.NET applications and services that are all working together, cooperatively, inside the same Akka.NET cluster.

Roles are essentially just tags that can be used to tell other Akka.Cluster services where to send traffic. Akka.Cluster.Sharding, DistributedPubSub, ClusterClient, and the router actors built-in to Akka.Cluster can all utilize roles to direct their message traffic towards specific areas of our Akka.NET cluster. We’ll be using them heavily throughout this workshop.

Rather than recap how clustered routers and, more specifically, how consistent hash routers work in this lesson, we’re going to redirect you to a blog post we wrote on this subject: “Distributing State in Akka.Cluster Applications”. Please read that post before moving onto our exercise if you aren’t familiar with clustered routers already.

Now, let’s enable Akka.Cluster inside both of these services and put them into communicate using a consistent hash router.

If you look inside src/Akka.CQRS.TradePlacers.Service/Program.cs, you’ll see that we’re already using Akka.Cluster’s APIs in a couple of areas:

This code will fail to execute at the moment, because Akka.Cluster isn’t loaded via HOCON. So let’s fix that problem first by adding the following HOCON into src/Akka.CQRS.TradePlacers.Service/app.conf:

This HOCON will do the following things to the Akka.CQRS.TradePlacers.Service:

You’ll notice that we already have some code designed to create this /user/tradesRouter router declared in C# inside Program.cs:

This was done so we could apply the TradeEventConsistentHashMapping.TradeEventMapping function to this router, which we can’t do via configuration:

This function is used to help extract the consistent hashing key that the router needs to compute which Akka.CQRS.TradeProcessor.Service instance we’re going to route each individual message to - all messages with the same hash key will all be routed to the same node. Consistent hash routers need some way to determine how to find the hash key on each message, and a ConsistentHashMapping delegate is one option.

Bonus Exercise: what are some of the other ways we could route relevant trade events to the Akka.CQRS.TradeProcessor.Service aside from a consistent hashing router? Why, or why not, would those work?

Open the src/Akka.CQRS.TradeProcessor.Service/app.conf file and add the following HOCON inside the akka block:

This HOCON will do the following things to the Akka.CQRS.TradeProcessor.Service:

Now that everything is in-place, rebuild the solution, and then set the following startup projects inside the Akka.CQRS.sln: 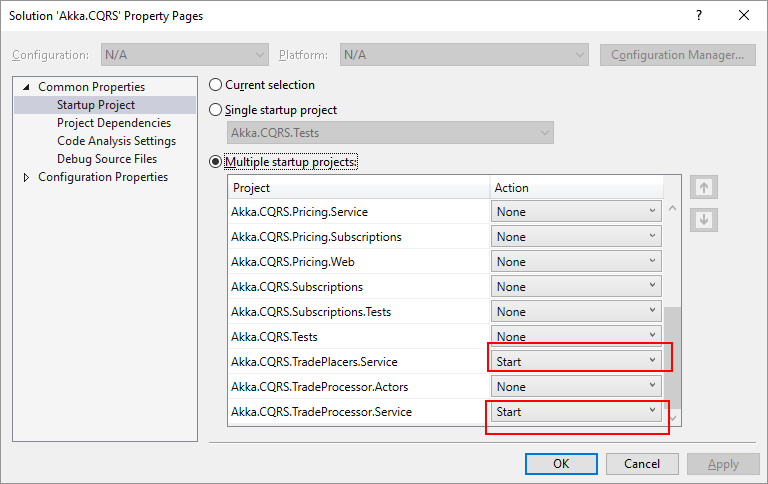 To get access to this dialog, right click on the Akka.CQRS file in Solution Explorer and select Select Startup Projects.

Now run the solution. You should see output similar to the following:

Using Petabridge.Cmd to View the Cluster

As a final step for this section, we should learn how to manage and manipulate our cluster using Petabridge.Cmd - all of the nodes in the Akka.CQRS solution are equipped with the Petabridge.Cmd.Host so they can receive connections from the pbm client.

While your cluster is running, in a new terminal window try the following:

And you should see the following output, assuming you haven’t launched any additional Akka.CQRS.TradePlacers.Service nodes from Visual Studio:

Excellent! Now try kicking one of the nodes out of the cluster using the cluster leave command:

This will force the current node to leave the cluster and, when it’s all said and done, have its process exit.

Bonus Exercise: can you create a 3 or a 4-node cluster by launching additional Akka.CQRS.TradePlacers.Service instances from Visual Studio? What does the cluster show output look like then? What are some of the other Petabridge.Cmd Akka.Cluster commands we can use here?

Now that we have a functioning Akka.NET cluster, it’s time for us to take our work to the next level by packaging our Akka.NET applications into their own Docker containers: Lesson 2 - Docker-izing Akka.NET and Akka.Cluster.