Performance Testing Should be Mandatory

Plus, How to Actually do it Right

Back in December I released the first publicly available version of NBench - Petabridge’s automated .NET performance testing and benchmarking framework.

NBench has proven itself to be an invaluable part of our QA process for Akka.NET and scores of other projects, for one critical reason: performance is a mission critical feature for an increasingly large number of applications. And if you can’t measure performance, then you’re shipping a totally untested feature to your end-users.

The Impact of Poor Performance

A simple anecdote to illustrate the real-world impact of shipping non-performant software.

One of my favorite musicians, whom I have never seen live before, is coming to town and I wanted to purchase a ticket. I was out of the country the day tickets went on sale, so if I wanted to attend I’d need to buy a ticket from a secondary market.

I decided to give a new company I’d never purchased tickets through before, SeatGeek, a try. I quickly found two tickets for about $100 each, went through the checkout process, put in my payment information, and submitted payment. A few seconds later I get an error message back letting me know that the tickets were no longer available. So I repeat this process a few more times with progressively more expensive tickets with no success.

Eventually I just gave up and SeatGeek lost about $500 worth of revenue, because I lost any confidence that their reported ticket inventory was available. The crucial error was that the underlying software responsible for reporting inventory availability under-performed - it wasn’t able to keep up with the demand of actual customers, and as a result they nearly lost my business. I tried again on a whim immediately before writing this post and was able to purchase a ticket with no issues this time. But you can’t depend on users giving you a second chance in production.

This is the “missed opportunities” impact of failing to deliver performant software; here’s some of the others:

Performance as a Feature

So to meet these expectations, we have to test performance just like the functionality of any other feature.

To do an adequate job elevating performance to a first-class feature in our application, we have to adopt a performance lifecycle to our release and development processes.

There are scores of different tools that serve different functions in this lifecycle. A good profiling tool like MiniProfiler or Glimpse will help you identify the critical path and some of the potential bottlenecks that need to be fixed. A monitoring and alerting tool like Grafana will track how well your system does against high-level performance goals.

And a tool like NBench is used for measuring the performance of individual components and building a history of those measurements.

“If you can measure it, you can control it”

Of all of the different portions of this lifecycle, the most important is to begin building a history of your performance over time.

Having a reliable performance history is what gives your team the ability to behave strategically with respect to performance - everyone can compare how well the current version of the product performs relative to the previous and whether or not a proposed change is actually an improvement over the other.

I originally developed NBench to help solve some problems with the remoting layer inside Akka.NET, and we were able to use automated NBench tests and their recorded histories to produce a 5x performance in throughput across a single Akka.Remote connection in a matter of weeks. 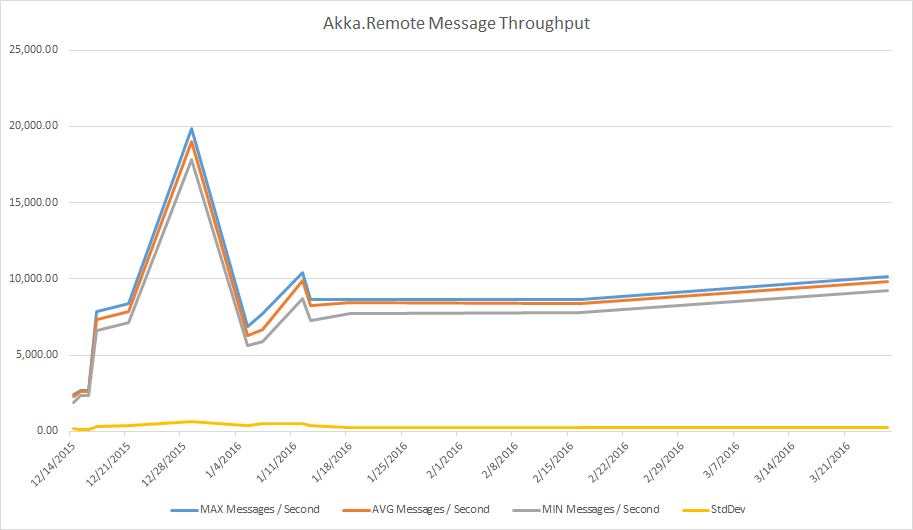 When Akka.NET v1.0.4 first shipped, users reported a significant drop in performance on Akka.Remote compared to what we delivered in Akka.NET v1.0.3. We set out to fix this as fast as possible, and I developed the first version of NBench as a tool to solve this issue specifically.

But, with a system in place that our team could measure against - 3 contributors teamed up to improve this number, and produced the above graph showing a 5x improvement in throughput within four weeks.

Here are the key dates and changes:

Our system is by no means perfect (Windows Azure blew up our build agent machine image on New Year’s Eve 2015, we think because it was a Store image comes with a Visual Studio license on it,) but it gave us the ability to significantly improve the performance quickly. And our new Akka.Remote transport scheduled for release in Akka.NET 1.5 has posted numbers in the 100k messages per second per connection range.

The point of all of this is - we can collectively see how the series of changes made to the components on the critical path created an incrementally better experience for end-users.

When we treat performance like a critical feature and give it the appropriate quality assurance treatment, it gives us more confidence in our software and a better experience for our end-users. Performance testing and benchmarking should be part of everyone’s development lifecycle, just like unit testing and everything else.