Best Practices and Patterns for Asynchronous Programming with Akka.NET Actors

Many years ago I wrote an article entitled “How to Do Asynchronous I/O with Akka.NET Actors Using PipeTo” - back when await support was still very much a work in progress. I subsequently wrote a major update on that article in 2016 - talking mostly about the benefits of PipeTo from a structural point of view.

I recently learned that this article has many of our own users under the impression that Akka.NET actors don’t support await semantics properly and that PipeTo is the only “blessed” pathway for working with asynchronous operations inside actors. This is not the case - await has had first class support inside actors for many years now.

That’s what this post and video cover: async, await, and PipeTo - how do they work differently, when should you consider using one over the other, and what are the “gotchas” that you need to know?

If you want to see the code sample that goes along with this video and blog post, you can find that here: https://github.com/Aaronontheweb/Akka.AsyncAwait

async and await inside Akka.NET Actors

First and foremost, async and await are natively supported inside Akka.NET actors - typically via the ReceiveAsync<T> method:

What ReceiveAsync signifies is that the receive-handler is going to return a Task rather than simply being a void method of some kind - and the actor has infrastructure built-in for suspending processing of any further messages each time an await is reached inside the ReceiveAsync method. 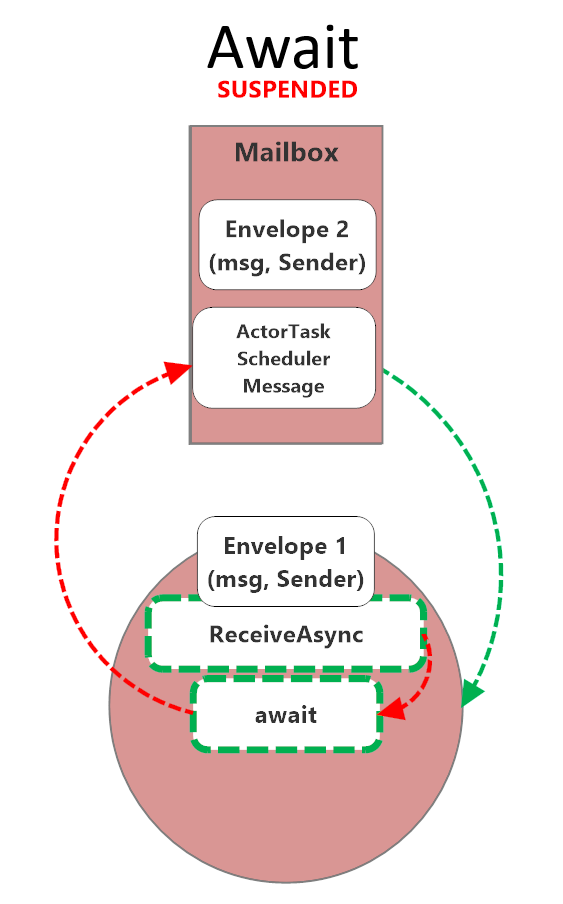 When an actor awaits, the following happens:

This is a detailed technical explanation for what’s happening with the actor internally but the bottom line is: await works the same way inside Akka.NET actors as it does everywhere else in .NET. await suspends the flow of execution without blocking a thread and allows the re-entrancy when the await-ed operation completes - the only difference here is that the actors manage the re-entrant portion through their Mailboxes, since that’s where actor thread-safety / serial message processing originates.

Everything I wrote in “How to Do Asynchronous I/O with Akka.NET Actors Using PipeTo” about PipeTo’s mechanics is still accurate, but I’ll illustrate how the code works differently from await-ing inside an actor below:

The structure is exactly the same as the AsyncAwaitActor - with one key difference: the PipeToActor doesn’t wait for the Task.Delay to complete prior to processing the next Messages.Req instance. Instead it kicks off a detatched Task and uses PipeTo to deliver the output back into its own mailbox upon completion. 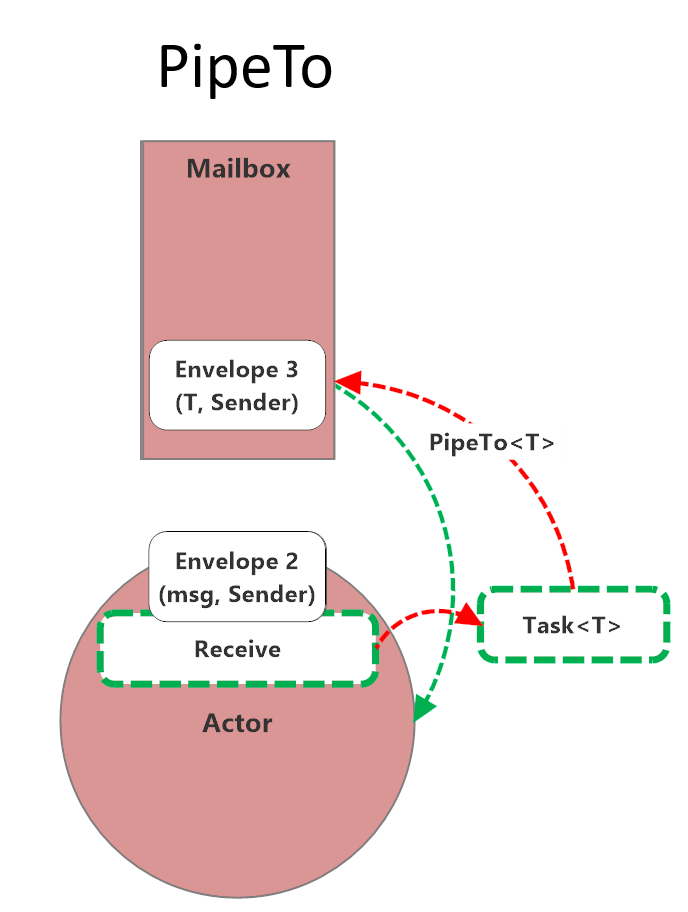 In the video accompanying this blog post, “Akka.NET Actors: Async / Await vs PipeTo” you can see me run some live Petabridge.Cmd commands against our code sample for this blog post.

I’m going to use some Jaeger tracing graphs produced by Phobos to help illustrate the difference between await and PipeTo from a flow-control perspective.

All messages were completed in the original order in which they were sent, which you can see on the Jaeger graph below as well. 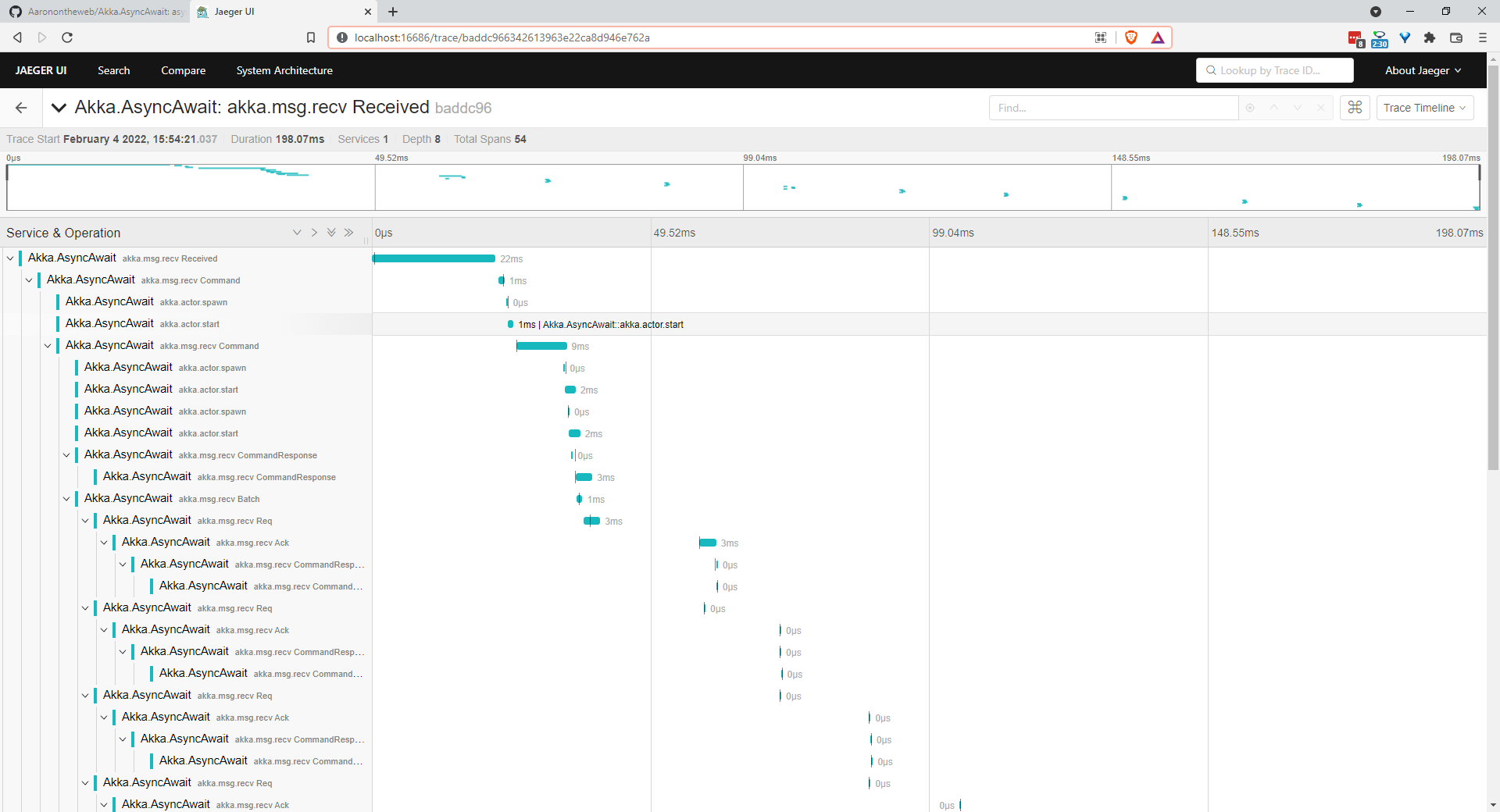 In this case, the messages completed out of order - this because all of the Tasks started by the PipeToActor ran in parallel, as you can see on the Jaeger graph for this scenario. 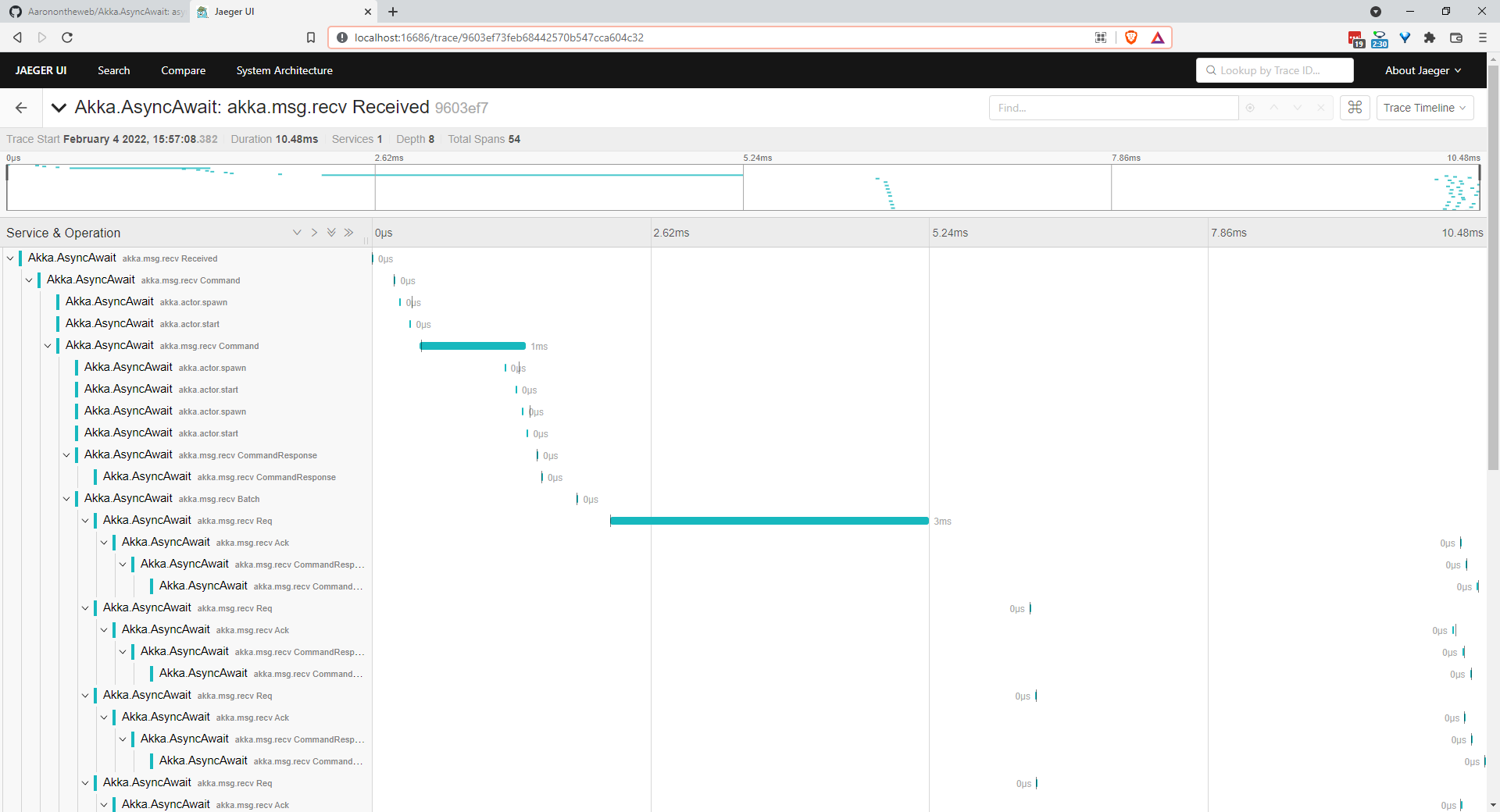 So why the big difference in performance between await and PipeTo? Simply stated, it comes down to flow control: await blocks the flow of execution and PipeTo does not.

In my original guidance in “How to Do Asynchronous I/O with Akka.NET Actors Using PipeTo” I heavily emphasized PipeTo largely because of my own recent experience building heavily loaded real-time analytics and marketing automation systems with Akka.NET - we used PipeTo quite heavily there prior to await being fully-supported in Akka.NET (back in 2014.) That left users under the impression that await isn’t properly supported in Akka.NET.

await has had first class support since mid-2015 and that’s not expected to change any time soon. Plus, over the years of working with hundreds of Akka.NET users my opinions on what should be used when have evolved quite a bit.

I’ll give you the short version:

You Should Use await When

You Should Use PipeTo When

A Note on Performance

As you can see from the Phobos graphs I included above, the PipeTo sample is significantly faster than the await sample - but this is only in the context of judging the throughput of a single actor. If you wanted to achieve similar throughput numbers with await the answer is simple - scale out and run more actors in parallel!

At the end of the day, the decision around await vs. PipeTo really comes down to flow control trade-offs. await is generally a better solution for managing more complex flows, whereas PipeTo is a more responsive solution that works best on relatively simple solutions.

I use a combination of both in my own code - and we do the same inside Akka.NET’s internals itself. Your mileage may vary!